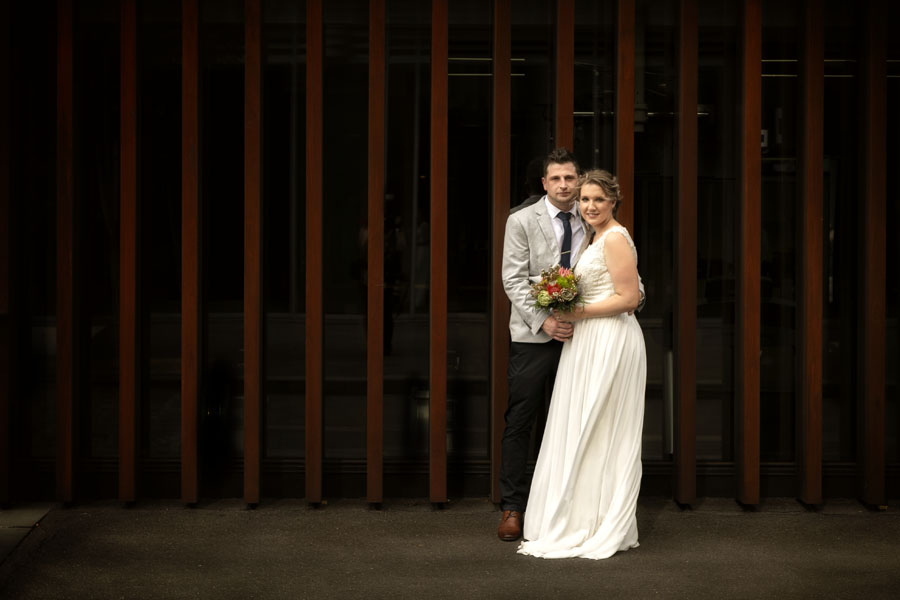 Emma and Chris wanted a very relaxed wedding with the emphasis on having plenty of fun and time for them and their guests to chat so All Smiles Docklands was the perfect venue! They also wanted to run seamlessly from the ceremony into the reception so we captured their photo shoot first, which is a great idea and also ideal if you are having a later ceremony.

As we arrived at Docklands the wind was so strong! A little worried what that might do to Emma’s hair before the ceremony, we were relieved that the waterside of the buildings was much calmer and we had a great hour just wandering from their hotel around the local vicinity. As you can see there are plenty of backdrops to shoot against including the funky hotel lobby!

After the shoot we left Emma to freshen up whilst we grabbed a quick coffee and then started to capture their guests arriving. Emma and Chris chose celebrant Andrew Redman who is a great guy and as we’ve worked with him before it’s always nice to catch up! Once the ceremony had concluded, the team rearranged the room for the evening so we took the guests outside for congratulations and the group photos.

As if it’s not busy enough organising the last minute arrangements of a wedding Emma also made her own wedding cake, doesn’t it look magnificent!

It was a warm evening so guests were able to take advantage of the balcony and city views whilst the other guests danced the night away! It was such a balmy night we were grateful that the ice cream shop on the waterfront was still open when we left!

As we said last post it’s always an honour to be asked to capture weddings within a family or group of friends and once again we were delighted to be asked to shoot Emma and Chris’s wedding. We have shot Emma’s two sisters’ and two cousins’ weddings so it’s like meeting up with old friends and then when Cam, Emma’s brother-in-law, suggested a family group photo included us we felt very special! Emma’s cousin Megan’s wedding was our very first one in Australia so it’s been lovely watching the family grow over the years!

Welcome to our blog, which we re-launched in 2015.

It's now built in to this updated website but you can still see our posts from the previous 5 years by clicking HERE!

Let your friends know that you found us!